when he could have zagged. His life and the history of the American Southeast would never be the same.

"... he assur'd me, that Carolina was the best Country I could go to; and, that there then lay a Ship in the Thames, in which I might have my Passage." 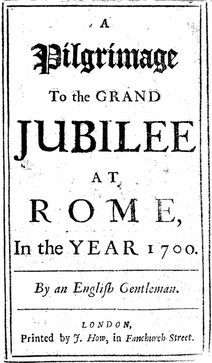 The road not taken...
In London in 1700, John Lawson, 25 years old, considered his next move. The son of a Yorkshire doctor and grandnephew of a Vice-Admiral, impressed by the gentlemen of the Royal Society (who met at Gresham College, where Lawson had attended lectures), Lawson was a a young man looking to make his mark on the world.

He thought he might as well go to the Grand Jubilee in Rome, a Catholic event held every 25 years drawing pilgrims to Rome. In a Europe still entering the age of enlightenment, the Jubilee was also a World's Fair kind of deal that gave people a good reason to go somewhere and do something. It was a big deal (another English gentleman wrote a book about it, in fact), and so the Jubilee would have been clearly attractive to someone looking for excitement.

But in his own subsequent book Lawson tells us he "accidentally met with a Gentleman who had been Abroad" -- Lawson doesn't give the name. And that gentleman convinced Lawson he was facing the wrong direction. I like to think of the unknown Gentleman saying, "Well, yeah, sure, you can go to the Jubilee, but don't you think Rome is kind of ... I don't know, seventeenth century? The eighteenth century is west -- over in Carolina." Whatever his friend said, Lawson took his advice and headed west instead of east. The history of natural observation in Carolina -- and on North America -- benefited.